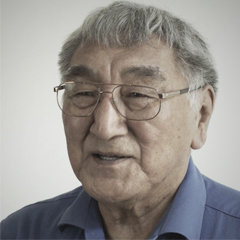 I was born in Barrow and raised in Kaktovik. We had an Iñupiat grade school teacher who only spoke English in the classroom from nine to four, but when the school day ended he’d speak our language. We had one classroom for everyone, and our teacher used the higher grade children to help teach the younger ones. It was a small village, and we were all related, so we were used to helping out with other kids in our community.

My grandfather was a lay preacher in the Presbyterian church. He would gather his children and grandchildren every night to read a Bible chapter, line by line, in English – teaching us the written language by the Bible. My mom had a first or second grade education in Barrow before the Depression started and everyone was needed to make a living, hunting and gathering. When I asked her for help with my homework in grade school I first realized I was learning something my parents had never encountered before. That’s when you realize you have to listen.

I graduated with my Associates in the class of 1963 from Sheldon Jackson. A bunch of us from the North Slope went to Sheldon Jackson then, and we already knew our language so there was no danger we would lose it. No one spoke English in the street at home, so the only time we were learning it was in the classroom. The idea of getting the Western education was to learn what my grandfather and the people in the community wanted us to learn.

I studied in Tempe, Arizona for a year of Christian Training School, along with other Native ministers from South Dakota, Montana, and Minnesota, and I went to seminary for my Masters of Divinity in Iowa, studying Greek and Hebrew. But before seminary I went to the University of Alaska Fairbanks. When they heard I was coming as a student, the Alaska Native Language Center had just opened, and they asked me to teach Iñupiaq. That was when I first thought about being a linguist. I was teaching at UAF, a full-time student raising a daughter, and giving the Iñupiat service every week at the First Presbyterian Church. Those two years were so busy I don’t remember them, but now I am the voice of the Inupiaq Rosetta Stone and of this new video game, Never Alone.

I believe that through this game, somebody might get interested in the language. It could give them a spark of the possibilities in the Iñupiaq language – in any language. You have to learn a new physiology of how sounds are made to learn a new language. Never Alone could make someone want to do that.