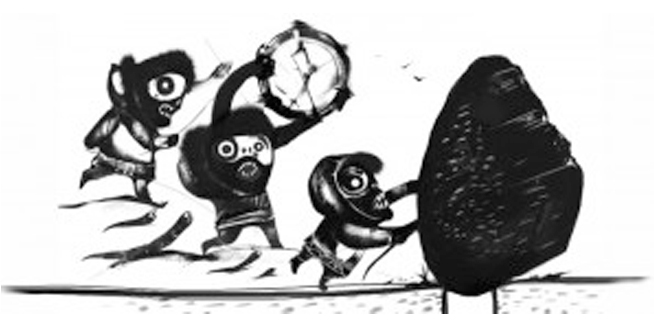 We speak over 6,000 different languages.  We live all across the earth.

But we are all human.  And share universal needs.

Indigenous, or native, peoples have stories as well – stories that pass knowledge from generation to generation and stories that help explain their place in the universe.  The stories may provide guidance on everything from living in extreme environments – the frozen Arctic, the blistering desert, the dense jungle – to why it is important to honor one’s parents and grandparents.

Often, these stories date back hundreds or even thousands of years.  The telling and retelling of these stories, and the act of handing them down, from old to young, help to define the culture and bind communities together.

Today, however, indigenous societies face incredible challenges in maintaining these cultural traditions while still accommodating a rapidly changing and modernizing world.  The social ties that have helped bond generations together are becoming frayed by new technologies, in particular the increasing penetration of digital and social media that are connecting people in new ways.  Video games and other digital media are often perceived as distancing youth and young adults from their elders, their culture and even their language.  Digital games are a medium that is largely alien to most elders, creating a concern that the more time youth spend playing these games, the less time they are connecting with their history, culture and values.

We asked ourselves if video games could actually be part of the solution, instead of just being perceived as part of the problem.

Could we use the power of video games to present these stories in new ways and to new audiences in a way that celebrates the people to whom the stories belong and extends their culture into new media?

Could we use the power of video games to actually connect Native youth and young adults with their elders and their own culture?

Could we use the power of video games to inspire gamers around the world to open their eyes to the amazing cultures and stories of indigenous people from around the world?  To become curious and open to accepting new ideas and perspectives?  To think about their own culture in new ways?

We call these World Games – games that bring carefully-selected stories from indigenous cultures from around the planet to life in compelling, innovative ways that are accessible and entertaining for global 21st century audiences.

But this is not simply finding great stories from amazing cultures and building a video game.

This is about delving deep into the stories, discovering their true meaning and teasing out the wisdom and knowledge contained within them.  It’s about presenting these stories in this new medium while remaining faithful and authentic to the people and culture to whom the stories belong.  It’s about sharing the people as much as the stories – in a way that allows others to experience their unique culture in an authentic, engaging, and entertaining manner.

It requires a commitment from the game developer to work with an indigenous partner (who may know very little about video games) and actively  take on the role of cultural student.  The developer must be willing to change preconceived notions of what the game could or should be and recraft it in a way that reflects input from multiple voices within the community so that the game play experience successfully encapsulates the important values and perspectives of the people from whom the story derives.  The developer must be willing to open up the design process and work hand-in-hand with elders, storytellers, cultural ambassadors to make a game that is truly a joint creation.

It also requires a real commitment from the indigenous partner to be willing to take risks to explore their stories and culture in a new medium and share the results with global audiences.

A variety of people, from traditional elders to storytellers to general cultural ambassadors, must be actively involved in all aspects of the games design, from initial concept brainstorming until the final result,  to ensure that the game reflects and shares the important values and perspectives of the culture.  But, much as the developer will be a student of the culture, these community representatives must also be willing to take on the role of student of game design and be open to listening and accepting that stories and characters may need to stretch to accommodate the needs of a video game and that this can be done in a way that still stays respectful and authentic to the source material.

The successful fusion of experienced game developers and committed indigenous people into a single team is hard work.  Which is probably why this hasn’t been done before.

But, this inclusive development process is what’s needed for the vision of World Games to be successful.

At the end, we believe that we will end up with amazing games that present rich cultures and fascinating stories and characters.  Games that celebrate and share under-represented and indigenous people and cultures in positive, authentic and respectful terms (rather than the caricatured, appropriated or stereotyped way in which they are often presented in popular digital media).

Games of which the indigenous people themselves can be proud—since they helped to create them in the first place—and use as a tool to help connect digitally active Native youth to their traditions and heritage in a way that complements and adapts to a changing world.

We hope the games will challenge gamers’ preconceptions and spark discussion and insights into one’s own culture and how it compares to that of the game.

And we think the games will represent a gateway to new ideas and concepts and that players will be inspired to pass through that gateway and take their experience beyond the game.

This is the vision of Inclusive Development and World Games.

We hope you enjoy it.

Have an idea for our World Game initiative? 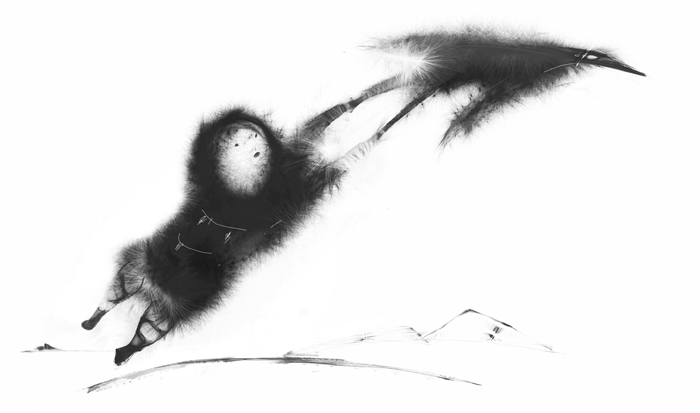 Character being carried away by a spirit bird.

Never Alone is the first World Game from Upper One Games and E-Line Media.

It was initially conceived by Cook Inlet Tribal Council, a tribal nonprofit organization serving Alaska Native and American Indian people residing in the Cook Inlet region of southcentral Alaska and brought to life through a development partnership between E-Line Media and CITC Enterprises, Inc., a wholly-owned for-profit subsidiary of CITC..

The game has been developed around the key themes of interdependence, resiliency and intergenerational exchange which are core themes of Alaska Native cultures, a collection of cultures that have evolved to ensure survival in one of the harshest environments on earth.

The main narrative arc of the game is anchored upon the traditional Iñupiat story “Kunuuksaayuka” (phonetically Koo-nook-sah-yooka), and the team worked directly with Minnie Gray, the Inupiaq elder whose father was first recorded telling the story, to ensure that the key themes, plot and messages of the story are accurately reflected in the game design.

In addition, many important elements of the game (characters, art, environments, themes, etc) have also been based on and inspired by additional traditional Alaska Native stories, folklore and cultural perspectives.

To deepen the player’s personal connection with Alaska Native people and understanding of their way of life, the game offers special “Insights” – including interviews with elders, storytellers, hunters – that will be unlocked throughout the game and will provide additional depth and richness to the overall experience.  These will be complemented online by additional content about the culture, region and making of the game.

This is a game that is a thousand years in the telling.  We hope you enjoy it and look for more World Games in the future.